To have this feature enabled on your account, please contact us at mail2@lynch2.com
Do not use this feature unless your scheduled campaign for the specific performance has already been sent . This is intended to be used retroactively, after the scheduled job has ran. It will send to those who purchased after the campaign has deployed during its regular schedule.To send a Gap Deployment, locate your Scheduled Campaign and click the " Send Now" button. 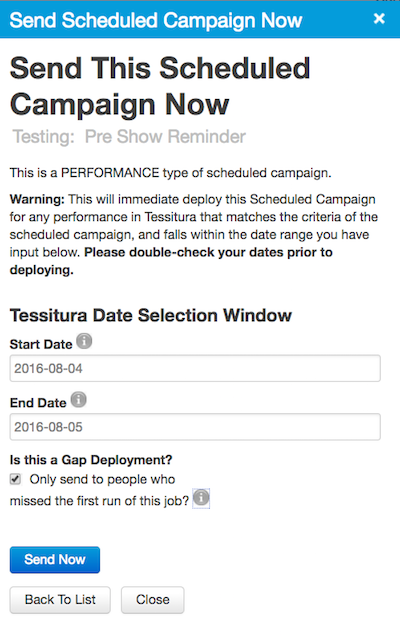 Next, check the Gap Deployment box if you want your scheduled campaign to send to any new patrons who have since purchased tickets since the last scheduled deployment.

Then, pick the "Start Date" and the "End Date" for the performance(s) that you want to cover with the deployment. Typically, for a single performance, this is the day of the performance and the day immediately after.  The Gap Deployment will only apply to the performance dates specified in the "Tessitura Date Selection Window."

Here's a typical of a schedule of events for using the Gap Deployment feature:

August 1: Performance reminder goes out to all ticket-holders for performance on August 4.

August 2: John Doe buys a ticket to the August 4 performance.

August 3: To ensure John Doe receives a performance reminder with important information, rather than copying the campaign, pulling and uploading a list, you can simply use the Gap Deployment feature with the Start and End Dates of August 4 and August 5. Any active contacts with tickets to the August 4 performance that were purchased after the scheduled campaign deployed on August 1 will receive the "gap deployment" performance reminder while excluding those who previously received it during its normal run.

August 4: The performance is held and John Doe and all other patrons received their important reminder to great success!